Bags of Ethics was approached by Tesco to create and make this exclusive collection of designer reusable bags designed by Julien Macdonald. The limited-edition collection features three designs and are available to purchase exclusively from Tesco stores in the UK, for £5.

Tesco has a long-running scheme to offer cotton reusable bags with proceeds generated from each sale going towards good causes, charities and back into local communities. For this collaboration with Bags of Ethics Julien Macdonald designed the collection to raise funds and awareness for Graduate Fashion Week. 50p from the sale of each bag will be donated by Tesco to Graduate Fashion Week. Graduate Fashion Week provides an unrivalled platform for students, from both British and international universities, to showcase their work to the best press buyers and retailers in the fashion industry and has provided many young designers their first start in the fashion industry.

These bags are 100% cotton and are re-usable, durable and are fashionable alternatives to the single-use plastic bags – which is known to cause serious damage to our environment. The collection will be available for purchase exclusively in Tesco stores and Online from May 2016.

Julien Macdonald OBE was born in Wales. He studied fashion knitwear at the University of Brighton before receiving his MA from the prestigious Royal College of Art in London. Soon after the success of his RCA graduation show in 1996, his talent caught the attention of Karl Lagerfeld. As head designer of knitwear for Chanel, Julien began to hone his skill set not only as a visionary within the knitwear field, but also as a driving force within a high fashion couture house. He launched his own label in 1998 with his first London Fashion Week show was staged for Spring/Summer 1998. In 2001, Macdonald was named at the ELLE style awards, British Designer of the Year and the same year he was appointed as successor to Alexander McQueen as the Creative Director of the French fashion house Givenchy, where he designed both their haute couture and ready-to-wear collections. Julien Macdoanld is a world renowned Fashion Designer, titled Fashion’s ‘King of glamour’. He has designed collections exclusively for the high street at affordable prices and continues to design for some of the most famous women in the world including Beyoncé, Kylie Minogue, Paloma Faith, Taylor Swift and Rihanna. 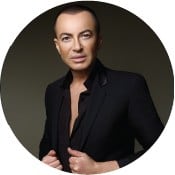